This page departs from the format of the main site, and exists to commemorate the best 'gig' I have ever been to. In August 1996, Robyn Hitchcock chartered two vintage double-decker buses and allowed a few dozen lucky ticket holders to accompany him on a drive around the western tip of the Isle of Wight, stopping off to play songs en-route.

A few of the images below are stills of the footage which plays during the closing credits of Robyn's DVD, I Often Dream of Trains in New York. One image is from the insert to This is the BBC, another from Robyn Sings. The rest of the photos are my own. I can be seen in one of them, but I'm not saying which...

Ticket holders (including myself) had mostly ferried over the water from England, and all gathered at the bus stop next to the ferry terminal at Yarmouth. There, the two vintage double-deckers pulled up and we caught a first glimpse of Robyn. This is the bus stop today:

Below is a view of one of the buses parked at the stop, while the passengers were still boarding. Robyn boarded this one, and is also seen below, on the lower deck, before we started out:

For access to the bus, one had to hand in a ticket - these, I remember, were hand-made using that sort of random multi-coloured printing effected by mixing paints in globules on the surface of water, then resting a sheet of paper on the surface before peeling off and drying. Robyn had hand-written numbers onto the paper and cut it into pieces - thus, we each had unique patterned and numbered tickets!

Before going on, I'll outline the places we would visit over the next couple of hours. The map below shows the three places Robyn played: 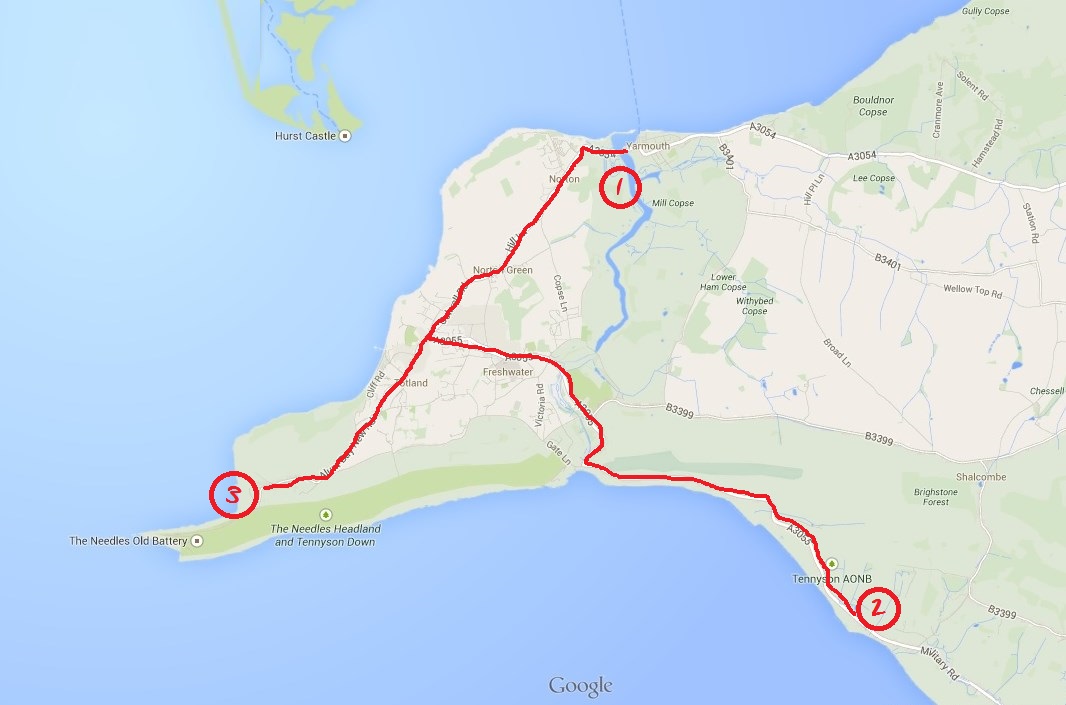 (1) is the bus stop at Yarmouth, where we started and finished.
(2) is the car park on the cliffs at Compton
(3) is the amusement area at Alum Bay

The first stop was to be Compton, so the two buses headed off in tandem. I was on the leading bus, the one with Robyn on, and the two photos below are taken from that bus, and show the one behind. First, driving away from the bus stop at Yarmouth, and second, rattling along the narrow coast road towards Compton.

We eventually reached the cliff-top car park, and the buses pulled in. Here's Robyn talking to those of us who were up top, telling us what was about to happen. It's about 6:30pm now. 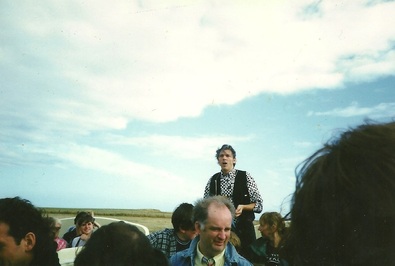 It's difficult to describe the atmosphere at this point. Here we are on top of a beautiful cliff in the evening, with Robyn about to step off the bus and play some songs to us. The view is stunning - and, as he informs us, this is where he wrote the song "Airscape", and it's as if we're right there with him while he is writing it. The two buses pull up next to each other, and Robyn unpacks his guitar and takes his position in front of the buses, facing the sea.

From what I can recall/research, the songs he now plays are as follows (ending up with the fitting "Oceanside"):


Most of the bus passengers watch from the top decks, and I'm among them for the first couple of songs. Here is my view. This, incidentally, is the first time I'd ever heard "I Dream of Antwoman" and I distinctly remember hearing the line, "Her Audry Hepburn feelers" for the first time!

I soon venture down to the ground for the remainder of the set... After a few songs, Robyn calls in Jake Kyle (upright bass) and Tim Keegan (guitar), both members of the group, Homer and working with Hitchcock at the time - this was the first time I'd seen them. 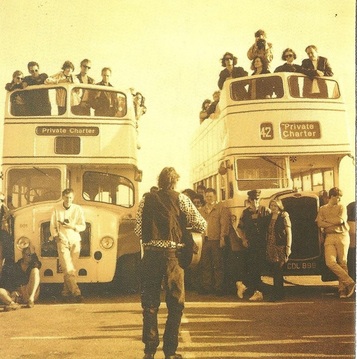 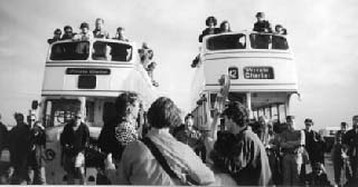 The three then relocated to the edge of the cliff and ran through the following songs:


Here are the three of them, as pictured in the insert of Robyn's CD, This is the BBC:

After a bit, as Uncle Monty would say, the sky was beginning to bruise, and we all climbed back into the buses to head back in the direction we'd come. On the way, it began spitting with rain. Robyn was on the open top deck where I was, and someone raised a chuckle from him by requesting he sing "Raining Twilight Coast"! Below is a shot of us in the spitting rain. Note former Whistle Test presenters, Mark Ellen and Andy Kershaw among the passengers (arrowed): 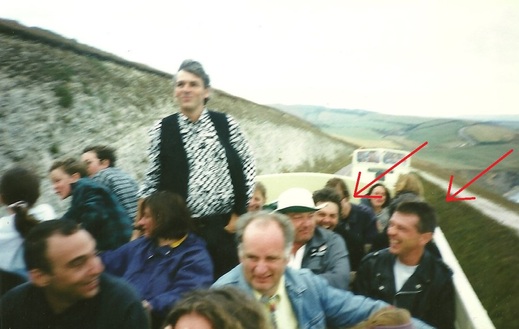 We weren't heading back to our starting point, however. Robyn had planned another stop and some more songs - but the unsettled weather forced an emergency plan. The buses veered down towards Alum Bay, where there was a (slightly) covered area among the amusement arcades and shops, plus a handy place for the buses to pull up. I have not seen photos of this section of the gig, but here is a photo of the location today. At the time, it was completely deserted, as it is in this picture:

Robyn, Jake and Tim grouped under the cover on the right, standing on wooden tables, and the rest of us piled out and stood around. I remember them deciding on their songs in a sort of code to each other: "Q of E?" "BQ?" - I wanted to think up some witty request like "RCE" or "BIP" but my mind wasn't quick enough!

In the event, these are the songs they selected:

All too soon, we were back on the bus, returning to the starting point for the drop-off. It seems the aim was to arrive, and call it a day - but for some reason, Robyn and his band-mates elected to run through a few more songs. This is where we were, and the three musicians stood under the small cover by the gift shop, the rest of us gathering around:

For this last part of the gig we were treated to:


"Let's Go Thundering" was another brand-new one to me, and would not be released on disc for another two years.

I recall Robyn appearing twitchy in this section - there was a loud bang from somewhere distant, and he shot out his gaze as if startled.

What happened after this is hazy. Myself and my friends found a nearby chip shop, and in the queue was Mark Ellen, who'd been taking photos on what was obviously a pretty decent camera. I asked him if he was planning to publish any - his answer was something like, "I ought to". Then in walked Robyn - by-passing the queue of course.

I have very vague memories of him playing yet more songs on the ferry back across the water - but my memory might be faulty! I am more than 50 percent sure though, as I can still picture the scene in my mind. Who knows?

IF you were there and have any memories or images, please get in touch - contact us using the form on the homepage.